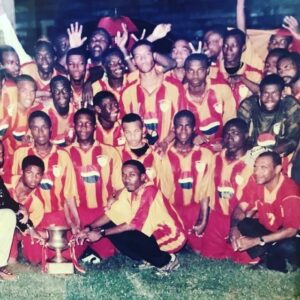 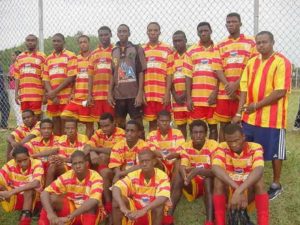 How did CC prepare me:

I entered CC as an almost 11 year old kid out of the garrison of Rose Heights. I had a lot of hype behind my name going into 1st form at CC because of the name I had created for myself at the VMBS and youth parish playing level. This caused me to behave in a manner of obligation, as I thought that people should just allow me to do what I want and I should not pay the consequences or even be asked any questions about my actions. It was after my first week of school that my life would gradually start to sharpen into what would eventually be a success. I came in contact with a one; “David Suarez”, who at the time was the vice Principal of the school. After a good 5 whips from his cane, for being loud; he brought me to his office and had a conversation with me that would let me realize that I do not have to be a product of my community. That conversation with Mr. Suarez would open up the view of college opportunities through my talent, but most importantly, it would create a father figure who would be there for me through the good times and the bad times at Cornwall College. He made sure that I was well grounded and disciplined on and off the field, and I found that I started to carry myself in a formable and respectful way in my community as well. The introduction of Mr. Suarez in my life made my time of Cornwall College a success, which changed my life tremendously.

What advice would you give to current student/athletes:

Life as a teenager is full of new experiences and adventures, but your teenage years are always the most difficult because they come with some of the most embarrassing events of your life. Body odor, new school/friends, facial hair, and growth spurts are just a few of the many potential difficulties that you could experience. You may also start receiving the praises from people in your surroundings, which may have you thinking that you are on cloud nine.  Furthermore, todays’ society place added pressure on young adults because they have to dress a certain way, fit in a with a particular clique, get the hottest girls, be a tough guy and not take disrespect from anyone, amongst other societal pressures. Nonetheless, it is a joy when a parent can watch their child grow and develop into a young adult right in front of your eyes.
So, I challenge you as young adults to choose wisely in life; filter out the negativity which comes with societal pressure and choose right. Make your parents proud! For those who do not fathers in their lives to make proud, do it for your mother, grandmother, grandfather, or whoever plays a major role in your life and your success to this point. One important thing I want to leave with you is: your teenage years will pass you by quicker than they came, but there is one thing that you need to know, years lost cannot be regained and time waits on no human being. The same people that praise you as the greatest player to ever put on the RED and Gold jersey, will be the first to bash you and call you bum when you are no longer a CC player.
Life is love, so live your life with love in your heart for all human beings and you will surely find your calling.

Favorite memory while at CC

Most memorable moment at CC was 1998 as a 9th grader, when I made my debut against Cambridge High in Cambridge. This is my favorite memory because I got the chance to play my first of many games in my CC career. I ended up even scoring my first DaCosta Cup career goal that day. Another thing that made that day memorable was the fact that I was only 14 years of age at the time and only a 9th grader, and we all know how competitive CC’s D’Cup team is to make, so to make the squad that young is an achievement, much more to play and score in your debut game. I went on to play 10 games that season, which was a huge accomplishment!